The e3 ATV is a smart alternative to the Quad Bike or Side by Side. It provides a safe, reliable, environmentally friendly farm and orchard  transport solution with low running costs.
With carrying capacity on the rear tilt tray and the ability to tow a trailer this ATV is a very capable workhorse. 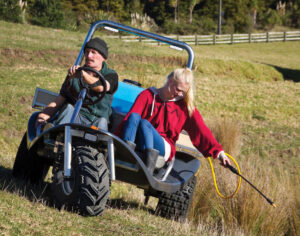 This fully electric powered vehicle delivers immediate torque and acceleration with assisted driver control provided by regenerative braking and traction management.
Specifically designed for use on New Zealand farms and orchards it is built to last, with strong non- corrosive materials. The e3 ATV offers extremely low running and maintenance costs with its 100% electric drive –

Why does the e3 ATV only have 3 wheels?

The e3 ATV was developed to offer the New Zealand farmer a far greater degree of user safety. In researching and testing various vehicle options we found that a 3 wheel configuration, able to carry two people plus a load over a wide range of terrains, provided the best overall result.
Upon completion of the e3 ATV prototype an extensive testing programme was carried out. Whilst the testing programme included vehicle reliability and durability its primary focus was on vehicle stability and safety. This testing further reinforced the value of a 3 wheel configuration for farming applications. Testing was carried out by vehicle design engineers and experienced farm vehicle drivers.
For an ATV vehicle to be an effective and safe transport platform all wheels need to maintain maximum contact with the ground. Unlike 4 wheeled ATV vehicles, which are challenged by uneven terrain and steep slopes and require complex suspension systems, a correctly designed 3 wheeled ATV such as the e3 ATV maintains maximum ground contact. Also unlike any previous 3 wheel farm trikes or ATVs the e3 ATV provides the correct weight balance distribution maintaining steerage and eliminating front corner tipping and sledging.

Why is the e3 ATV electric?

The e3 ATV uses electric propulsion for 2 key reasons. Firstly, because of the drive control that only an electrically powered vehicle can provide. With dual independent torque controlled electric motors on the rear wheels, the e3 ATV provides superior traction capability at low speeds. This makes the vehicle ideal for the demanding and varied terrain conditions experienced on New Zealand farms.
The electric motor technology employed in the e3 ATV also provides regenerative braking. When not applying the accelerator the motor acts as a generator and the accompanying friction (electrical resistance) assists in overcoming inertia and helps to significantly slow the vehicle.
The second reason is running costs. The running costs of an electric vehicle are considerably lower than any fuel powered vehicle. For further information please see ‘Why is the e3 ATV more economical to run than a fuel powered farm vehicle?’ below.

Why is the e3 ATV more stable than a quad bike?

The answer to this question is one of simple physics. When compared to a quad bike the e3 ATV has a significantly lower centre of gravity (a point from which the weight of a body or system may be considered to act) with both driver and passenger sitting more than 250mm lower. When the centre of gravity is combined with the vehicle being 250mm wider and 450mm longer than any quad bike the e3 ATV is the more stable vehicle platform. Speed control is also a factor of the vehicles stability and the e3 ATV has been designed to operate effectively at very low speeds unlike a fuel powered vehicle which requires higher engine revolutions and wheel speed to achieve sufficient torque to move the vehicle
Further support of the e3 ATV’s stability is the fact that it does not require ‘active riding’ – a necessity when riding quad bikes.

Why is the e3 ATV more economical to run than a fuel powered farm vehicle?

Being 100% electric the e3 ATV requires only a very small amount of power to recharge its battery – less than 50 cents per day. Indications are that the average running costs of a quad bike are $4,400 per annum – this figure includes fuel, servicing and repairs. Unlike a quad bike the e3 ATV requires no offsite servicing – keeping the chain oiled is the only maintenance requirement.
Also unlike most quad bikes or other farm vehicles the e3 ATV has been engineered to last – robust construction includes stainless steel fittings, marine grade seats and switches, hot dip galvanised chassis and suspension and a simple single gear reduction transmission. Even the lithium-ion batteries, if discharged to 5%, are good for 8,000 charge cycles – approximately 22 years of daily charging. As for the electric motors, the brushless design means they do not have any wearing parts, e.g. carbon brushes and collectors. The motors have a longer service life and are as close as you can get to being maintenance-free, giving a considerable reduction in service and replacement costs.
Based on a quad bikes average running costs alone you would pay for an e3 ATV in 3 years or less.

Why does an e3 ATV go more places?

The e3 ATV’s design combines a highly robust low centre of gravity 3 wheel design, with excellent stability and dual traction controlled motors. Whether it’s rugged steep terrain or a wet slippery and boggy trail the e3 ATV can more than cope. With ground clearance greater than any quad bike or side by side the e3 ATV provides a transport platform that can tackle a wide range of farm conditions. Even those well-worn quad bike or side by side trails that are deeply rutted and full of mud are no obstacle for the e3 ATV. Being a 3 wheeler the front wheel is lifted clear enabling its greater ground clearance to be even more effective.

For more information or to arrange an e3 ATV demonstration; call or email